You are here: Home / Archives for AR mural 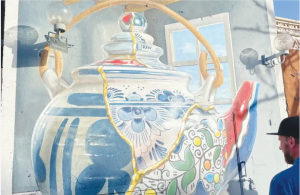 The Israeli city of Jaffa has its first augmented reality mural, the credit for which goes to the Embassy of the Netherlands. The mural is in fact a gift that it received from the Dutch Embassy and is essentially a teapot that has been painted by the famous Dutch painter Leon Keer. The teapot, as has been depicted in the painted is broken though but has been glued together … END_OF_DOCUMENT_TOKEN_TO_BE_REPLACED