You are here: Home / Archives for Meta

The Tokyo Game Show is being held in Japan and for a change, it is a physical event this time. So, it’s business as usual for the mega event just as it used to be in the past. That said, those who might still have inhibitions to be at the event physically or are unable to visit Tokyo right now can still catch up with all the latest developments thanks to the virtual edition of … END_OF_DOCUMENT_TOKEN_TO_BE_REPLACED

Meta Platforms Inc. has its annual event lined up on October 11, Reuters reported. That is also when the company is expected to reveal its all new VR headset that is being developed in what has come to be known as Project Cambria. The company is also expected to make a few other announcements that would shed light on its future ambitions in the AR and VR space. The above has … END_OF_DOCUMENT_TOKEN_TO_BE_REPLACED

Facebook is all set to launch its all-new AR/ VR headset in October. This has been revealed by none other than the company CEO Mark Zuckerberg. The CEO was speaking on The Joe Rogan Experience podcast when he made the revelation. Also, as PhoneArena reported, the upcoming AR/VR headset would be unique in that it will have better non-verbal communication, which can be like … END_OF_DOCUMENT_TOKEN_TO_BE_REPLACED

Meta had announced last year they are working on a smartwatch that would compete with the Apple Watch. The proposed smartwatch was also touted to come with an integrated camera along with other advanced features. However, as per the latest development on this, the said smartwatch has now been put on the back burner and no one knows when the project is going to be revived again, … END_OF_DOCUMENT_TOKEN_TO_BE_REPLACED 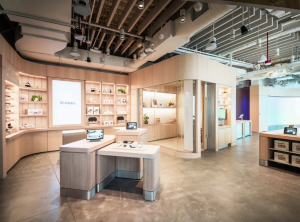 Meta has launched its first hardware retail store which will serve as a location where buyers can try out the various hardware devices that the company has or will have on offer in the future. Right now, there are the Meta Portal videophones and Quest VR headsets that visitors will be able to try out and also buy if needed. As The Verge reported, the store will also have on … END_OF_DOCUMENT_TOKEN_TO_BE_REPLACED

Meta announced it is working to introduce its Horizon Worlds social metaverse platform to the web. This has been revealed by Meta CTO Andrew “Boz” Bosworth via a Tweet message. Meanwhile, Meta VP of Horizon Vivek Sharma stated plans are already underway to bring Horizon to mobile devices, something that likely will happen later this year itself. Similarly, there also are plans … END_OF_DOCUMENT_TOKEN_TO_BE_REPLACED